Write a short paper about the construction of magic squares. 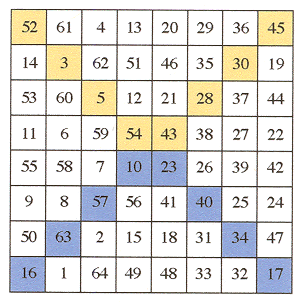 You might include such facts as there is 1 standard magic square of order 1, 0 of order 2, 8 of order 3, 440 of order 4, and 275,305,224 of order 5. According to the Guinness Book of World Records, Leon H. Nissimov of San Antonio, Texas, has discovered the largest known magic square with sum of 999,999,999,989. Show that such a magic square is not possible. You might also include the properties of the magic square discovered by Benjamin Franklin.

Design a piece of art based on a magic square.

A process for producing an artistic pattern using magic squares is described in an article, “An Art-Ful Application Using Magic Squares” by Margaret J. Kenney (The Mathematics Teacher, January 1982, pp. 83-89). Read the article and design some magic square art pieces.